What is restless leg syndrome? It is a syndrome marked by an almost insatiable desire to move one’s legs, usually at night. It is a neurological disorder.

RLS is a disorder in which you have an uncontrolled desire to move your legs, generally responding to an unpleasant sensation. It can be anything from a tingling sensation to crawling or tugging.

It usually happens when you’re seated or lying down in the evening or at night. Moving around briefly alleviates the uncomfortable feeling.

All these medical problems can cause RLS or make the symptoms worse.

Patients with RLS who have a genetic link develop symptoms sooner in life (before 45) than individuals with RLS whose cause is different. RLS is more common in women than men.

Depending on the age, RLS symptoms can vary from mild to severe. It may become worse as you get older. It’s a chronic illness with no cure but can be controlled with lifestyle changes and medication. 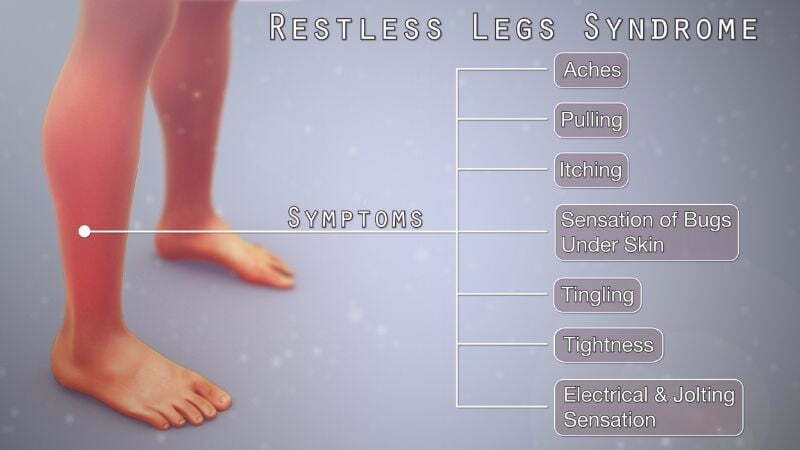 The primary symptom is a strong desire to move one’s legs. In addition, the following symptoms often accompany RLS:

When To See A Doctor and How RLS Is Diagnosed?

As it is a neurological disorder, there are no specific tests performed. Instead, the diagnosis is made based on the symptoms. The sensations might be difficult to describe at times.

For example, RLS sufferers seldom characterize their symptoms as muscular cramps or numbness. However, they regularly express a desire to move their legs.

It’s normal for symptoms to change in intensity. Symptoms may subside for a while before reappearing.

Based on the symptoms and to rule out any other conditions, the doctor can prescribe a series of tests, including blood work and physical and neurological exams.

As RLS is primarily a genetic condition, the doctor may evaluate a complete family history related to RLS. In addition, other sleep disorders, particularly obstructive sleep apnea, may be considered using an overnight sleep study.

Other than that, your healthcare practitioner will also inquire about any sleep issues you’ve had due to your symptoms, such as insomnia (difficulty falling or staying asleep).

Your healthcare practitioner will also ask about any problems with remaining awake during the day, as well as any other issues with behavior or work performance.

To confirm the diagnosis of RLS, a patient suffering from any symptoms will have to meet the following criteria:

The treatment depends on the severity of the symptoms. Non-drug treatments are prescribed first to manage RLS, especially if you have mild symptoms. Home remedies may also help in the reduction of some symptoms. However, it may take trial and error to discover the most effective solution.

The doctor may recommend the following lifestyle changes to manage the symptoms:

Other than home remedies, if the pain is unmanageable and the symptoms are severe, the doctor can prescribe medications that include drugs that increase dopamine. Dopamine-induced medications control the urge to move at night and reduce the intensity of involuntary jerks in sleep.

Mild light-headedness and nausea are possible side effects. In addition, over time, these drugs may become less effective.

Muscle Relaxant and Sleep aids: These medications help you relax and sleep better.

Narcotics: These medications can reduce the pain and help you relax

Anticonvulsants: These medications help lessen sensory disturbances. It can cause some side effects like fatigue and dizziness.

It might take several tries to find the perfect drug. As your symptoms vary, your doctor will alter the medicine and dose.

Restless Leg Syndrome symptoms can range from being barely irritating to incapacitating. It can’t be cured and can progress to more severe problems. It has the potential to disrupt and affect sleeping patterns.

Severe RLS can significantly impact one’s quality of life and can lead to depression. So, it becomes imperative to manage RLS symptoms before they cause severe problems. Compression stockings, lifestyle changes, and exercise can prove helpful in managing the discomfort of RLS and preventing it from worsening.

Q1. How do you calm down restless legs?

Consider making lifestyle changes by maintaining a strict sleeping schedule, regular exercise, and meditation to reduce stress. Avoid tea and coffee. Use a heating pad to ease the pain, soak your legs in hot water, and massage your legs before bed. These are the few things you can do to calm down your restless legs.

Q2. What is the number one cause of restless leg syndrome?

There is no number one cause of the syndrome. It is a neurological condition that is often genetic in nature. Certain other medical conditions, such as low levels of iron, stress, and depression, could also result in RLS.

Q3. What foods can cause restless leg syndrome?

The foods to avoid in RLS are sugary foods, fried food, chocolate, caffeine, and alcohol.

Q4. Why do you get restless legs at night?

Dopamine in the brain is reduced when nerve cells are destroyed, resulting in muscular spasms and involuntary movements. Dopamine levels usually decrease as the day progresses, explaining why restless legs syndrome symptoms are generally more significant in the evening and at night.

There are no comments yet.